One of the most important concepts we teach is that management and ownership are different. They have different roles and responsibilities in a company, legally and practically. If you are familiar with our “5 Family Business Mountains,” you know this as the blue mountain (Management) and the gold mountain (Ownership).

But when the leader of the management is also the sole owner, like in many family businesses, this is rarely considered. Why? Because the founder has never had to separate them. In fact, for her or him, that’s the beauty of being King or Queen.

We often joke that the sole manager/owners have the privilege of holding board meetings in the shower. Something we advise against when more people are involved.

Management Is Not Ownership

If they don’t see management and ownership as different roles, then they will tie them together when it comes to transitioning the company – and that can be a costly mistake. Throwing the baby out with the bathwater, so to speak.

If you can separate them, then you are able to transition by dipping your toes in the water of letting go – not just diving in head-first, hoping that those on the shore will figure it out on their own.

In other words, consider stepping back from management well before you decide to transfer ownership.

Depending on your situation, this may be a transfer to a non-family executive or to the next generation. But it’s testing ground to make sure the company will continue to survive and thrive without your day-to-day oversight. That’s enough transition for now. Only when that transition has taken place do we often recommend discussing ownership transition.

So, when it comes to the car you’ve spent your entire life building, it might make sense to let others test drive it before you let them sign on the dotted line.

I welcome your thoughts to jared@dvfbc.com. 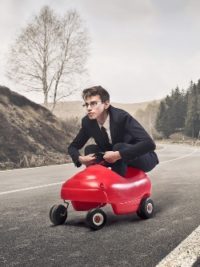