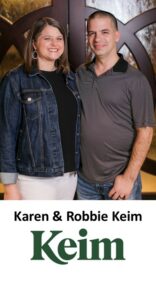 What got you here won’t get you where you want to go.

Most family businesses survived and even thrived in the early years due to hard work, major risk taking, dogged persistence, and family talent.  These elements aren’t enough to guarantee long-term success for the family OR the business.  Working smarter, not harder, includes finding the right advisors to guide the family and business through the normal and ongoing emotional, relational, management, financial, legal, tax, and structural complexities.  This takes discernment, time, and energy.  Hiring the best advisors who truly collaborate is one of the best investments owners make.

Sally will facilitate conversations with Henry and G4 Leaders Robbie and Karen Keim of Keim, Charm, Ohio to include: